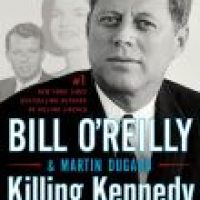 Next Friday, November 22, 2013, marks the 50th Anniversary of the assassination of President John F. Kennedy. It was a defining moment in our nation’s history and a day that will be much discussed over the next two weeks on television, in newspapers and across dinner tables everywhere.

Killing Kennedy, by Bill O’Reilly and Martin Dugard, has spent a lot of time since its release last year on the New York Times Bestseller List and it is this week’s True Tuesday Showcase.