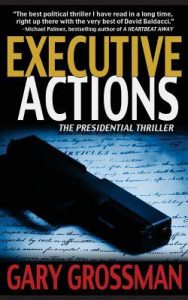 Synopsis:
In the midst of a heated presidential campaign, Secret Service Agent Scott Roarke gets an assignment that turns his world upside down. His investigation uncovers a plot so monstrous it can change the course of America’s future and world politics. Roarke discovers that presidency is about to fall into the hands of a hostile foreign power. The power play is so well-conceived that even the U.S. Constitution itself is a tool designed to guarantee the plot’s success. With the election clock ticking, Roarke and Boston attorney Katie Kessler race at breakneck speed to prevent the unthinkable. But they also know that it will take a miracle to stop the takeover from happening.

Review:
Gary Grossman has a wild imagination and you, the reader, are the beneficiary. I figured out who did it and why pretty early in the book. You probably will, too, and that’s okay. It’s the HOW it was done and the race to stop it before it’s too late that makes this thriller shine.  The multi-layered plot contained enough intriguing twists and surprises along the way to keep me hooked and turning pages long into the night.  And Scott Roarke is a likable and well-rounded character who I expect to see grow as the series continues.

Executive Actions sets up the series nicely, leaving you satisfied with the ending, but wanting to see more from these characters. I have already purchased and added the next books in the series to by TBR pile!

“Topic one. Theodore Wilson Lodge. Presidential material?” bellowed the host at the top of his Sunday morning television show. He directed his question to the political pundit to his left. “Victor Monihan, syndicated columnist for The Philadelphia Inquirer, is Teddy ready, yes or no?”

“Yes,” Monihan shot back. You had to speak up quickly on the lively program. There was no air between questions and answers. “If the cameras could vote, he’d be a shoo-in.”

“But they don’t. So again, will it be Mr. Lodge goes to Washington?” quizzed the host of the revamped McLaughlin Group. The reference to the Frank Capra movie was lost on most of the audience. Even AMC and Turner Classics weren’t running very many black and white movies anymore.

“Absolutely.” Monihan didn’t take a breath between thoughts. The host hated dead air. Pause and you’re dead. Someone else will jump in. “He’s totally informed, he’s had great committee assignments and he can do the job. Congressman Lodge comes off as a highly capable leader. Trustworthy. The all-American boy grown up. And he positively looks like a president should look … presidential.”

“So a tan and a good build gets you to the White House?” the host argued.

“It means I don’t have to worry about him taking my job.” The overweight columnist laughed, which made his belly spread his shirt to a point just shy of popping the buttons. The joke was good, but he lost his platform with it.

“No. With only two days before the New York primary, there’s no way Lodge can do it. He doesn’t have the votes. And there’s not enough time to get them. Henry Lamden will be addressing the Democratic Party at the August convention in Denver. But even when he gets the nomination, he’ll have a hard time against Taylor.”

The discussion expanded to include the other members of the panel. They talked about Montana Governor Henry Lamden’s qualities. About President Morgan Taylor’s rigid persona. About the voters’ appetite. And back again to the possibilities. “Is there any way Lodge can do what fellow Vermont favorite son Calvin Coolidge did: go all the way to the White House?” the venerable host rhetorically asked. The panel knew this was not the time to reply. Turning to the camera the host said, “Not according to my watch.”

This was the throw to the video package from the campaign trail.

Teddy Lodge smiled as he sat on the edge of his hotel bed to get closer to the TV set. He was half-packed. The rest would wait until the videotape report concluded. Lodge pressed the volume louder on his remote.

“Be right out,” she answered from the bathroom. Lodge tightened the knot on the hand-painted tie he’d been given the day before. The gift, from a home crafter in Albany, would go into his collection and eventually into his Presidential Library. But first he’d wear it for the cameras. She’d see it and tell everyone she knew. More votes.

Mrs. Lodge leaned over her husband and hugged him as he watched himself on TV. “You look great, sweetheart.” He agreed. The footage was perfect: Lodge in the thick of an adoring Manhattan crowd, the wind playing with his wavy brown hair, his Armani suit jacket draped over his arm. He came off relaxed and in charge; less like a politician than an everyday guy. An everyday guy who saw himself as President of the United States. And at 6’2” he stood above most of the crowd.

Lodge knew the unusual statistical edge his height provided. Historically, the taller of the two major presidential candidates almost always wins the election. And he was considerably taller than President Morgan Taylor.

The host obviously wasn’t a supporter. But the coverage counted. He hit the bullet points of Lodge’s career.

“Teddy’s been fast-tracking since college. He graduated Yale Law School and has a graduate degree in Physics at Stanford. The man speaks three languages. He worked on various government contracts until he decided to return to his country home in Burlington, Vermont, and run for State Assembly. Two years later, so long Burlington, hello Washington. Mr. Lodge went to Capitol Hill as a young, energetic first-term congressman. He distinguished himself in international politics and now serves as Chairman of the House Subcommittee on Terrorism and Homeland Security. He’s as close to a rocket scientist as they come in Washington. He heads the House Committee on Energy and understands the complexities of the issues. But is he going to the White House?” the moderator asked in his feature videotape. “New Yorkers will decide Tuesday.”

And with that set up came the obligatory sound bite. It couldn’t have been better if Teddy Lodge had picked it himself. It was declarative and persuasive. The producer of the video package must have been in his camp.

“Tomorrow the world will be different. More dangerous. More hateful. Different times need different leaders. Make no mistake, there are no more safe harbors or promised lands. Unless … unless we make better choices today than yesterday. Better friends tomorrow than today.”

As he watched, Lodge remembered the clincher was yet to come. Things like that just didn’t get cut. He was right.

Thunderous applause followed; applause from the audience at a Madison Square Garden rally.

Eighteen seconds total screen time. Unbelievable on McLaughlin. But Lodge was not an easy edit. He’d learned to break the sound bite barrier by constantly modulating his voice for impact, issuing phrases in related couplets and triplets, and punching them with an almost religious zeal.

Like everything else in his life, he worked hard at communicating effectively. He punctuated every word with a moderately-affected New England accent. Whether or not they agreed with his politics, columnists called him the best orator in years. Increasing numbers of them bestowed almost Kennedy like reverence. And through the camera lens, baby boomers saw an old friend while younger voters found a new voice.

The video story ended and the host brought the debate back to his panel. “Peter Weisel, Washington Bureau Chief of The Chicago Tribune, What sayest thou? Can Teddy un-lodge Lamden?”

“Unlikely.” Weisel, a young, black reporter, was the outspoken liberal of the panel and a realist. “But he’ll help the ticket. He’s a strong Number Two. A junior pairing with Governor Lamden can work. The flip side of Kennedy-Johnson. Let the Democrats make him VP. Besides, his good looks won’t go away in four or eight years. TV will still like him.”

Theodore Wilson Lodge, 46 years old and strikingly handsome, definitely could pull in the camera lens. He had the same effect on women and they held far more votes in America than men. The fact was not lost on the show’s only female contributor of the week. “Debra Redding of The Boston Globe, is Lodge your man?”

Without missing a beat she volunteered, “There are only two problems that I see. One, I’m married. The other – so is he.”

What a wonderful way to start the morning, the congressman said to himself.

Gary Grossman is a multiple Emmy Award-winning network television producer, a print and television journalist, and novelist. He has produced more than 10,000 television shows for 40 broadcast and cable networks including primetime specials, reality and competition series, and live event telecasts.

Grossman taught journalism, film and television at Emerson College, Boston University, and USC and has guest lectured at colleges and universities around the United States. He currently serves as an Adjunct Professor of Film and Television at Loyola Marymount University in Los Angeles. He is a member of the Board of Trustees at Emerson College in Boston and he serves on the Boston University Metropolitan College Advisory Board. He is a member of the International Thriller Writers Association and The Military Writers Society of America.

This is a rafflecopter giveaway hosted by Partners in Crime Virtual Book Tours for Gary Grossman. There will be 1 winner of one (1) $15 Amazon.com Gift Card AND the opportunity to Suggest a Character Name for the Next Book in the Executive Series! The giveaway begins on June 1 and runs through August 3, 2017.