It’s time for another installment of Thriller Thursday!

This one was really exciting for me – No Rest For The Dead was written by twenty-six amazing mystery and thriller authors including Sandra Brown, RL Stine, Jeffery Deaver, Michael Palmer, Kathy Reichs and more.  Twenty-Six!  As excited as I was for what promised to be a great mystery, I was even more excited to see how all these author’s writing styles would blend together into one cohesive story.  Would it be seamless or would it be disjointed?  The only way to find out was to dive right in. 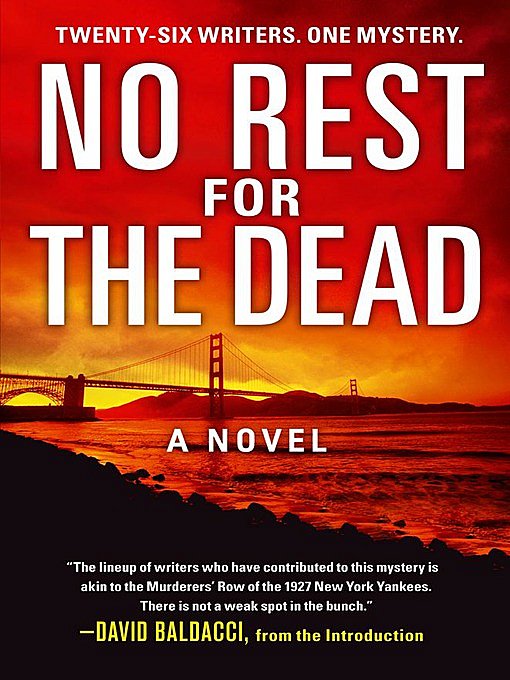 From the back of the book:
When Christopher Thomas, a ruthless curator at San Francisco’s McFall Art Museum, is murdered and his decaying body is found in an iron maiden in a Berlin museum, his wife, Rosemary, is the primary suspect, and she is tried, convicted and executed.

Ten years later, Jon Nunn, the detective who cracked the case, is convinced that the wrong person was put to death.  In the years since the case was closed, he’s discovered a web of deceit and betrayal surrounding the Thomases that could implicate any number of people in the crime.  With the help of the dead woman’s friend, he plans to gather everyone who was there the night Christopher died and finally uncover the truth, suspect by suspect.

Solving this case may be Nunn’s last chance for redemption – but the shadowy forces behind Christopher’s death will stop at nothing to silence the past forever.

I read most of this book on a plane and I’m sure the person sitting next to me, my sweet husband, was tired of all my “oh, did you catch that?” and other out-loud gasps as I made my way though the unfolding story.  I might have even elbowed him once or twice while I was reading, as if he had any idea what I was talking about… What can I say, I’m an interactive reader.

Anyway, the chapters flowed seamlessly.  Other than slight changes in the cadence of the words, the only real way to tell a new author had taken over was the name at the top of the page.  It’s amazing to me how twenty-six different authors were able to create such a wonderful, flowing story full of twists, turns and shockers.

I read the last few chapters the next morning on the train during my morning commute.  I really thought I had this one figured out, but I was only partially right.  The final twist at the end was enough for me to declare out-loud, “No freakin’ way!”, apparently loud enough to turn a few heads.  Which was a great opportunity to make a book recommendation!

Brother and sister editing team Andrew and Lamia Gulli, from Strand Magazine, have done a wonderful job taking all of these different author voices and weaving them together into one serial novel.  If the twenty-six authors contributing to No Rest For The Dead aren’t enough to make you click the buy it now button for the shear fun of reading them all in one place, then knowing that proceeds from the sale of this novel go to the Leukemia & Lymphoma Society should make you feel good about buying this book right away.

If you can’t tell already, I loved No Rest For The Dead, as much for having some of my favorite mystery writers in one place as for the mystery itself.  I gave this one five sunshines!

Who are your favorite mystery writers?