Last week we started a new feature called True Tuesday Showcase and y’all seemed to like it, so we’ll continue with that as a weekly feature.

This week, we’re highlighting Run, Brother, Run: A Memoir of Murder in My Family by David Berg. 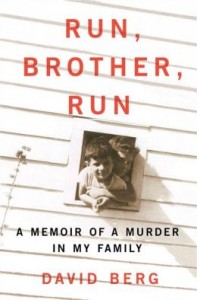 Back of the book description:
A searing family memoir of a tempestuous Texas boyhood that led to the vicious murder of the author’s brother. As William Faulkner said, “The past is not dead, it’s not even past.” This observation seems especially true in matters of family, when the fury between generations is often never resolved and instead secretly carried, a wound that cannot heal. For David Berg, this is truer than for most, and once you read the story of his family, you will understand why he held it privately for so long and why the betrayals between parent and child can be the most wrenching of all.

In 1968 David Berg’s brother, Alan, was murdered by Charles Harrelson, a notorious hit man and father of actor Woody Harrelson. Alan was only thirty-one when he disappeared; six months later his remains were found in a ditch in Texas. Run, Brother, Run is Berg’s story of the murder. But it is also his account of the psychic destruction of the Berg family by the author’s father, who allowed a grievous blunder at the age of twenty-three to define his life. The event changed the fate of a clan and fell most heavily on Alan, the firstborn son, who tried to both redeem and escape his father yet could not.

This achingly painful family history is also a portrait of an iconic American place, playing out in the shady bars of Houston, in small-town law offices and courtrooms, and in remote ranch lands where bad things happen—a true-crime murder drama, all perfectly calibrated. Writing with cold-eyed grief and a wild, lacerating humor, Berg tells us first about the striving Jewish family that created Alan Berg and set him on a course for self-destruction and then about the gross miscarriage of justice that followed.

As with the best and most powerfully written memoirs, the author has kept this horrific story to himself for a long time. A scrappy and pugnacious narrator, Berg takes his account into the darkest human behaviors: the epic battles between father and son, marital destruction, reckless gambling, crooked legal practices, extortion, and, of course, cold-blooded murder. Run, Brother, Run is a raw, furious, bawdy, and scathing testimonial about love, hate, and pain— and utterly unforgettable.

Have you read this memoir yet?  What are your thoughts?

You can purchase Run, Brother, Run from your favorite neighborhood bookseller or these online retailers:
Barnes & Noble