We’re happy today to welcome Three Ring Circus author Luke Gray to Lazy Day Books with his review of Barnabas Piper’s The Pastor’s Kid.  As a preacher’s kid myself, I can relate. -Kimberly 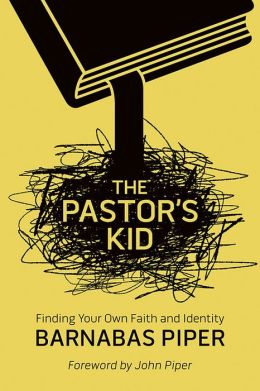 In the introduction to his book, The Pastor’s Kid, Barnabas Piper writes two things that capture The Pastor’s Kid. First Piper describes the three objectives of his book: Give voice to PKs and their challenges, speak to pastors about how they can help their kids, and write to the church about how to “ease the burden of the pastor and his family” (p. 17). Second, Piper explains that The Pastor’s Kid is not an autobiography since he doesn’t believe his upbringing was that interesting and because “to write a memoir well, one has to be an artistic genius” (p. 18). These two statements shape the entire book, for better and for worse.

As far as achieving his three objectives, Barnabas Piper succeeds, but in an underwhelming manner. Please don’t misunderstand, Piper has moments of true brilliance. Many of his analogies are strikingly effective and his description of the impossible situation pastors are placed in is poignant:

The pastor is seen as the spiritual burden bearer for an entire congregation. He is the prophetic voice of authority, the nearly infallible voice of God. He is the answer man for questions on topics ranging from sex to stewardship to sanctification. He is the figurehead of a religious institution, and often this means he is a political pundit too. He must be an expert accountant, theologian, psychologist, marketer, strategist, and orator. In short he must exhibit every spiritual gift God intended to be dispersed throughout the entire church (p 98).

This comment and many others like it accurately capture the position Pastors and their children are placed in.

However, most of the time I was reading, I felt like I was studying a picture of the ocean floor instead of snorkeling there myself; the experience was two dimensional instead of being one of immersion. This is where Piper’s reluctance to write a memoir hurts his work the most. At a couple points, he alludes to sins in his life that ruined his job and put his marriage in jeopardy, but he never trusts the reader enough to be transparent and share, even briefly, what those sins were or even what category those sins fit.

On rare occasion, Piper shares his own stories, and with great result—detailing for instance a reprimand he, but not his non-PK peers, received from a random church woman for his taste in music. At even more points though, his own personal experiences are missing when they would have bolstered the writing tremendously. This leaves the writer’s voice feeling more clinical than personal.

Beyond this, The Pastor’s Kid does suffer from a couple smaller issues. There’s an issue with the page numbering. The book is listed at 160 pages, but the Foreword starts on page 11, the introduction on page 15, the text of chapter 1 starts on page 23, and the last chapter concludes on page 143. Throw in chapter titles that take up not one but two entire pages of text, and the actual length of the book is closer to 112 pages, if you count the introduction. Perhaps I’m being a pedant, but as a reader and aspiring author, I don’t mind buying a 112 page book, but I do mind being lead to believe that it’s 48 pages longer.

At some point in researching The Pastor’s Kid, I found that Piper was first inspired to write the book when he was asked to write a blog post or short article about being a pastor’s kid. As he brainstormed, Piper found that he had more to say than fit into a blog post. So he decided to write a book. However, I don’t think the writing fully made the transition from blog post to book.

Also the introduction by John Piper is, simply put, the worst introduction I have ever read—a surprise considering John Piper’s success as a writer. Rather than providing his own perspective and analysis of the book, the father of the author spends the entire time quoting his son’s writing. It would have been much simpler and painless to write, “This book is endorsed by John Piper.”

I don’t say any of this to discredit The Pastor’s Kid in its entirety. I did find it engaging, and I found myself relating quite a bit as a missionary kid. It is a book I will recommend to my future brother-in-law who is pursuing a seminary degree, to my pastor or PK friends, and to my family members. It’s a good resource, and Barnabas Piper did succeed in his three objectives. Ultimately though, I simply wish The Pastor’s Kid had been more. It’s alright, but should have been great, and I feel like the material warrants better.

The Pastor’s Kid by Barnabas Piper is available at your favorite neighborhood bookstore or these online booksellers:

About Luke:
One of nine children, Luke Gray was born and raised in the Philippines as a missionary kid.  After returning to the U.S. at seventeen, he studied creative writing at the University of Kansas, graduating with distinction in 2011.

He lives in the mountains around Asheville, North Carolina with his wife. When he’s not working as the assistant manager at a local Ace Hardware, he’s writing, trout fishing, or waiting for the newest addition to the family.

You can learn more about Luke on his blog, Post-Jaded Missionary Kid.  His new book, Three Ring Circus, is available for purchase from Westbow Press, Barnes & Noble and Kobo Books.