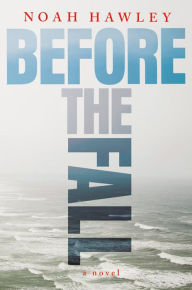 From the Emmy, PEN, Peabody, Critics’ Choice, and Golden Globe Award-winning creator of the TV show Fargo comes the thriller of the year.

On a foggy summer night, eleven people–ten privileged, one down-on-his-luck painter–depart Martha’s Vineyard on a private jet headed for New York. Sixteen minutes later, the unthinkable happens: the plane plunges into the ocean. The only survivors are Scott Burroughs–the painter–and a four-year-old boy, who is now the last remaining member of an immensely wealthy and powerful media mogul’s family.

With chapters weaving between the aftermath of the crash and the backstories of the passengers and crew members–including a Wall Street titan and his wife, a Texan-born party boy just in from London, a young woman questioning her path in life, and a career pilot–the mystery surrounding the tragedy heightens. As the passengers’ intrigues unravel, odd coincidences point to a conspiracy. Was it merely by dumb chance that so many influential people perished? Or was something far more sinister at work? Events soon threaten to spiral out of control in an escalating storm of media outrage and accusations. And while Scott struggles to cope with fame that borders on notoriety, the authorities scramble to salvage the truth from the wreckage.

Amid pulse-quickening suspense, the fragile relationship between Scott and the young boy glows at the heart of this stunning novel, raising questions of fate, human nature, and the inextricable ties that bind us together.

Everyone has their path.  The choices they’ve made.  How any two people end up in the same place at the same time is a mystery.  You get on an elevator with a dozen strangers.  You ride a bus, wait in line for the bathroom.  It happens every day.  To try to predict the places we’ll go and the people we’ll meet would be pointless.

There is no denying Noah Hawley’s immense talent for creating a vibrant world filled with interesting characters and multiple potential plot twists.  The premise of Before the Fall is intriguing – a plane full of wealthy passengers (targets?), and one normal person, crashes sixteen minutes after take off. With only two survivors, the race is on to find out how and why this plane crashed and who is responsible.  The possibilities are endless!

Hawley begins each chapter telling the story from the perspective of different characters.  Using this technique, we learn far more about both the characters and the investigation than we would if the story was told from only Scott Burroughs perspective, though his is the most prevalent.

I thoroughly enjoyed Hawley’s storytelling throughout the book, his writing style is easy to read and keeps you turning the pages.  I do think this is the kind of book that will make a fantastic movie and could even see a thrilling limited run TV series for a plot like this one.

Possible Spoiler Alert! Stop here if you don’t want a clue to the ending!

I know Hawley was making a larger statement about life in general and that all of us, mere mortals and very important people alike, are sometimes innocent bystanders caught in events that have nothing to do with us.  Sometimes a series of coincidences add up to a conspiracy and sometimes they are just a tragic series of stunning coincidences.  I get it.

But, after investing so much time and emotion into these characters, I felt completely let down by the ending.  Not only was the big reveal at the end underwhelming, I don’t feel like there was satisfactory resolution for the survivors.  And one of the presumed dead passengers received no resolution at all.

I’d love to hear your thoughts, too.  What did you think about Before the Fall?