Today, we’re participating in another Partners in Crime Blog Tour and want to say Thank You to them for including us in another great book tour!

Keep reading for an excerpt from the book as well as instructions to enter our The Joshua Stone E-book Giveaway! 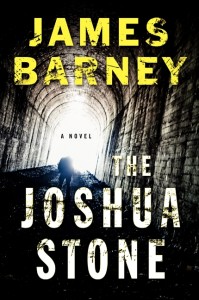 Back of the book description:
In 1959, in an underground laboratory in a remote region of West Virginia, a secret government experiment went terribly awry. Half a dozen scientists mysteriously disappeared, and all subsequent efforts to rescue them failed. In desperation, President Eisenhower ordered the lab sealed shut and all records of its existence destroyed. Now, fifty-four years later, something from the lab has emerged.

When mysterious events begin occurring along the New River Valley in West Virginia, government agents Mike Califano and Ana Thorne are sent to investigate. What they discover will shake the foundations of science and religion and put both agents in the crosshairs of a deadly, worldwide conspiracy. A powerful and mysterious force has been unleashed, and it’s about to fall into the wrong hands. To prevent a global catastrophe, Califano and Thorne must work together to solve a biblical mystery that has confounded scholars for centuries. And they must do so quickly, before time runs out… forever.

Malachi slowly shook his head. This was all wrong. To begin with, why was it light outside?

He struggled once again to piece together the chain of events that had lead him to this abandoned coal station along the New River Railroad Line.  He’d entered the lab around 10:30 P.M., although it might have been a little later. Time– he lingered on that thought for a moment. Something about the time.

A new memory was now hovering just beyond his mental grasp, tantalizingly close yet still too vague to visualize.  Slowly, bits and pieces came into focus.

The Joshua Stone is a cleverly crafted spy thriller interwoven with the Bible story of Joshua and the very sci-fi theory of time-dilation.  In other words, an additive page-turner from start to finish.  The action moves fast and, if you’re paying attention, James Barney leaves plenty of clues for you to follow.  But don’t worry, he has enough twists in this story that you will be surprised at how it all comes together in the end.

I found myself making good use of Google so I could find more information about what I was reading.  I learned a lot while reading The Joshua Stone and that’s always a good thing.  I was pleasantly surprised to discover Barney included a section at the end of book “Separating Fact From Fiction” where he discusses what’s factually true in the book and what was his fabulous fiction created from those grains of truth.

The Joshua Stone is a stand-alone thriller, but the author left the door open for a sequel.  I hope he walks through that door and we see Mike Califano and Ana Thorne teamed up together in future adventures!

Want to win your very own copy of THE JOSHUA STONE by James Barney?

Since we will use email to notify the winner, all entries must include a valid email address. We are giving away an e-book copy of the book, so the winner will also be asked to provide their preferred e-book format so the publisher knows what to send you.

The winner will be determined by random drawing on Monday, November 11, 2013 at 8p CST. That gives you five full days to enter yourself and tell all your friends, too!

Update 11/12/2013: Congratulations Eric W., winner of our The Joshua Stone Giveaway! Please check your email for instructions to claim your eBook.  Thank you to all our participants, please check back often for more great giveaways!

You can learn more about author James Barney by visiting his website.

You can purchase THE JOSHUA STONE at your favorite neighborhood bookstore these online retailers:
Barnes & Noble
Kobo Books