To become the King, you have to take the crown. It won’t be given up lightly. Heroin kingpin, Willis McDaniel, has been wearing that particular piece of jewelry for far too long, and youngblood, Lennie Jack, thinks it would look really good on his head. When a junkie tells Jack about a big delivery, the young Vietnam vet makes his move. Feeling his empire crumble, McDaniel puts the word out to find whoever’s responsible. The hunt is on, the battle is engaged, and the streets of Detroit run red with blood.

For Bennie Lee Sims’ wake, Lennie Jack chose the sky-blue Fleetwood with the chromed-up bumpers and the bar-line running from the trunk to the dash, dispensing six different liquors with chaser.

Joe Red brought the car to a halt in front of Fraser’s Funeral Parlor on Madison Boulevard. He backed it in between a red El Dorado with a diamond-shaped rear window and a pink Lincoln with a leopard-skin roof.

Lennie Jack wore a medium-length Afro and had thick wide sideburns that grew neatly into the ends of a bushy moustache drooping over his top lip. He got out of the passenger seat in a manner that favored his left shoulder. He had on a cream-colored suede coat that stopped just below the knee, and a .38 in his waistband.

Joe Red was shorter and thinner and younger than Lennie Jack. He got his nickname for an extremely light complexion and a thick curly bush of reddish brown hair; it spilled from under the wide-brimmed black hat cocked low over his right ear. He had on the black leather midi with the red-stitched cape; he had a .45 automatic in his waistband.

They came briskly down the sidewalk and went up the six concrete steps to the entrance of Fraser’s.

An attendant in a somber gray suit and dark tie greeted them at the door.

“Come this way,” the attendant said.

He guided them down a narrow hallway past a knot of elderly black women waiting to file into one of the viewing rooms flanking the hall on either side. The hallway reeked of death; the women wept.

They passed three more doors before the attendant led them left at the end of the hall and down a short flight of stairs. A single 60-watt bulb illuminated the lower level. The attendant went past the row of ebony- and silver-colored caskets stacked near the staircase and stopped at a door in the back of the room.

“They’re in there,” he said. He turned and headed back up the stairs. Lennie Jack rapped softly at the door. They stood a few feet back from the doorway to be recognizable in the dim light.

“Yeah, this it,” said a voice behind the crack.

A man with wavy black hair in a white mink jacket and red knicker boots let them in. He relocked the door.

The room smelled of cigarette smoke. A row of silver metal chairs had been stacked in a neat line on one side, but most of the people come to pay their respects were scattered in the back in tight little clusters, talking and laughing.

At the front of the long room, near a small table of champagne bottles, Bennie Lee Sims’ tuxedo-dad body lay in a silver-colored coffin with a bright satin lining.

His face was dusty with a fine white powder.

Lennie Jack walked over to the coffin. He dipped his fingers in the silver tray of cocaine on top and sprinkled it over Bennie Lee.

Joe Red stepped up behind him and tried to find a spot that wasn’t covered. He finally decided on the lips and scattered a handful of the fine white crystalline powder around Bennie Lee’s mouth and chin.

They moved through the crowd, shaking hands and greeting people. Almost everybody had come to see Bennie Lee off.

The Ware brothers were there: Willie, the oldest at twenty-four; Simmy, who was twenty; and June, who often swaggered as if he were the elder of the clan but still had the baby-smooth face and look of wide- eyed adolescence. He was seventeen.

Pretty Boy Sam was standing in one corner with his right foot resting on one of the metal chairs. He had smooth brown skin and almost girlish features, topped off by a pointed Van Dyke beard. His good looks masked a violent temper.

Pretty Boy Sam had worn his full-length brown mink and brought his woman to pay his respects to Bennie Lee Sims, who had two neat bullet holes right between the eyes and underneath all the cocaine on his face.

Slim Williams was there with his woman. He was a tall, thin dark-skinned man whose left eye had been destroyed by an errant shotgun blast. He now wore a variety of gaily colored eye patches the way he had heard Sammy Davis did when he lost his eye. He had on a patch of bright green and red plaid and stood conversing on one side of the room with Hooker, Woody Woods, and Mack Lee.

Willis McDaniel was not there, but then, he never came. He had probably never considered it, but it was a source of irritation to the others.

Joe Red said, “Hey Jack, he the man. He don’t hafta come see nobody off if he don’t wanta come. Ain’t none of these people thinkin’ bout makin’ him come. Who gon make him come?”

“Why he can’t come like the rest of the people?” Lennie Jack said. “Has anybody ever thought of that, you reckon? He too big now to bring his ass out here to see a dude off? He probably had him ripped anyway. I don’t understand how these chumps let an old man like that just get in there and rule.”

“Now we both know how he got it,” Joe Red said. “He took it. He say, ‘Look, I’m gon be the man on this side of town cause I got my thing together and I got plenty big shit behind me. Now what you motherfuckers say?’ Everybody say, ‘You the man, Mister McDaniel.’ That’s the way he did it.”

“That is the way to take it from him, too.” Lennie Jack said. “We gon get lucky pretty soon. I think he can be had and I know just the way to do it. I got some people working on it. The first thing they teach you in the war is to fight fire with fire, you know?”

He took the tiny gold spoon on the chain around his neck and scooped a pinch of cocaine off the tray Joe Red handed him. He brought the spoon up to his right nostril and sniffed deeply.

The crowd was beginning to drift to the corner of the room where Slim Williams was holding court. Slim was thirty-seven, and much older than most of his audience. Lennie Jack was twenty-six, and Joe Red had just turned twenty-one three days ago.

Slim Williams had diamond rings on three fingers of his left hand, and he was waving them around in a dazzling display and talking about Joe the Grind.

“Joe used to walk into a bar with his dudes with him–he always carried these two dudes with him everywhere he went. He’d walk into a place fulla people and say, ‘I’m Joe the Grind, set up the bar! All pimps and players step up to the bar and bring your whores with you.’”

Slim Williams chuckled. “Then Joe would talk about ‘em. He used to say, ‘You ain’t no pimp, nigger. What you doin’ up here? I ain’t buying no drinks for you. Sit down!’”

Slim Williams laughed; so did everybody else.

“Joe used to rayfield a chump bag dude too,” Slim Williams said. “He used to tell ‘em ‘Just cause you got eight or nine hundred dollars worth of business don’t mean you somebody.’ Then Joe would throw a roll down that’d choke a Goddamn mule and tell the chump: ‘Looka here boy, I just had my man sell forty-two thousand dollars worth of heh-rawn, and I got twenty more joints to hear from fore midnight. Gon sit down somewhere, you don’t belong up here with no big dope men.”

They laughed again and somebody passed the coke tray.

June Ware took his pinch and squared his toes in the eighty-dollar calfskin boots from Australia, via Perrin’s Men’s Shoppe on Fifth Avenue in Manhattan.

“Oh, somebody shot ‘im in the head in an after-hours joint,” Slim Williams said. “And lemme tell you, youall shoulda been there to see Joe’s wake. It put this thing to shame. Compared to Joe’s, this thing ain’t nothing. This light-weight. They say there was coke in the block wrapped in foil and pure heh-rawn set out on silver trays with diamonds in the sides.

“So they partied all night till twelve the next day, then they all went to Joe’s funeral. After the funeral was over, everybody got on the plane with his woman and went to Jamaica for two days.”

“Yeah, that’s the truth,” Slim Williams said. “And you shoulda seen that funeral too. They say a broad came over from Chicago in a white-on-white El Dorado, and she was dressed in all white with a bad-ass mink round her shoulders. Then when she came out of the hotel the next day for Joe’s funeral, they say she was in all black. She went to the graveyard and threw one hundred roses on Joe. Then she got in her ride and split. Don’t nobody know who she was. When they had Joe’s funeral march, there was one hundred fifty big pieces lined up for blocks down Madison Boulevard. They pulled a brand new Brough-ham behind the hearse, and when the march was over they took the car out to the trash yard and crushed it.”

Mack Lee, who was twenty-two years old and decked out from the top of his big apple hat to the tip of his leather platforms in bright lavender, came their way with his woman on his arm.

The woman looked about nineteen; she wore diamond-studded earrings and a matching bracelet. She carried a tray of glasses and an unopened bottle of champagne.

“We oughta drink a toast to Bennie Lee,” Mack Lee said, “and ask the Lord how come he made him so stupid.”

The laughter rippled through the room; Mack Lee popped the cork in the champagne bottle and poured the rounds. 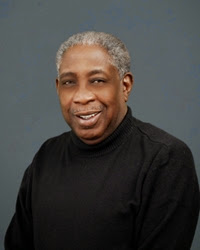 A native of Natchez, Miss., Smith is a graduate of San Francisco State University, and the Summer Program for Minority Journalists at the Columbia University Graduate School of Journalism. He began his journalism career as a reporter for the Long Beach, Calif. Independent Press-Telegram.

From 1979 until 2002, Smith served as the Atlanta Bureau Chief and as a national correspondent for Newsweek.