Today I’m excited to showcase Blond Cargo by John Lansing. Keep reading for more information about this thriller as well as a chance to win a copy for yourself! We also have an excerpt posted for you to read today. 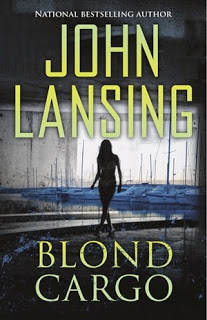 Synopsis:
“A pulse-pounding thriller with a charming protagonist” (Kirkus Reviews), this gripping ebook continues the story that began in The Devil’s Necktie.

Jack Bertolino’s son, Chris, was the victim of a brutal murder attempt and Vincent Cardona, a mafia boss, provided information that helped Jack take down the perpetrator of the crime. Jack accepted the favor knowing there’d be blowback. In Blond Cargo the mobster’s daughter has gone missing and Cardona turned in his chit. Jack discovers that the young, blond, mafia princess has been kidnapped and imprisoned while rich, politically connected men negotiate her value as a sex slave.

A sizzling whodunit for fans of James Patterson and Patricia Cornwell, Blond Cargo taps into the real-life crime world to deliver a thrilling, action-packed story that will keep you on the edge of your seat until the explosive, unprecedented finale.

Jack carried a Subway turkey sandwich, a tall unsweetened iced coffee, a bottle of water, and a smile as he keyed the security gate that led to the dock in Marina del Rey where his boat was moored. The marina was always quiet during the week. Just the way he liked it.

He stopped to admire his twenty-eight feet of heaven before stepping onto his boat’s transom and then . . .

Jack never forgot a voice, which explained his reluctance to turn around.

Miserably persistent, Jack thought. He turned to face Peter Maniacci, who was dressed head-to-toe in black. With his outstretched arms draped over the chain-link fence, Peter looked like an Italian scarecrow. The black circles under his eyes belied his youth. The sharp points of his sideburns, his boots, and the .38 hanging lazily from a shoulder holster added menace to his goofy grin.

So close, Jack thought. His only worry that day had been whether to eat his sandwich dockside or out on the Pacific with a view of the Santa Monica Pier.

Jack let out a labored sigh. “We could do this all day. What’s up?”

any of his son’s particulars. When he didn’t answer, Peter continued.

“Hey, nice boat. I used to fish for fluke off the north shore. Long Island. I think I must be in the wrong business.”

“My boss was wondering if you could spare a few minutes of your time.”

As if on cue, a black Town Car materialized behind Peter and came to a smooth, silent stop. The car rose visibly when Peter’s boss, a thick, broad-shouldered man, stepped out of the rear seat.

Vincent Cardona. Expensive suit, the body of a defensive linebacker—fleshy but muscled. Dark, penetrating eyes. Cardona looked in both directions before leveling his feral gaze on Jack. An attempt at a smile fell short of the mark. A thick manila envelope was tucked under one beefy arm.

Jack had been aware there would be some form of payback due for information Cardona had provided on Arturo Delgado, the man responsible for the attempted murder of his son. He just didn’t think it would come due this quickly. He opened the locked gate and let the big man follow him down the dock toward his used Cutwater cabin cruiser.

As Peter stood sentry in front of the Lincoln Town Car, Jack allowed the devil entry to his little piece of paradise.

“How’s your boy? How’s the pitching arm?” Vincent asked bluntly. Just a reminder of why he was there.

“On the mend.” Jack gestured to one of two canvas deck chairs in the open cockpit of the boat. Both men sat in silence as Jack waited for Cardona to explain the reason for his visit.

Jack wasn’t comfortable with Cardona’s talking about Chris, but the big man had taken it upon himself to station Peter outside Saint John’s Health Center while his son was drifting between life and death. Cardona’s enforcer had scared off Delgado, and that might have saved his son’s life. The unsolicited good deed was greatly appreciated by Jack. The debt weighed heavily.

“It rips your heart out when your children have problems and you can’t do nothing to help,” Cardona said with the raspy wheeze of a man who had abused cigars, drugs, booze, and fatty sausage for most of his life.

“What can I do for you?” Jack asked, not wanting to prolong the impromptu meeting.

Cardona, unfazed by Jack’s brusqueness, answered by pulling out a picture and handing it to Jack.

“Angelica Marie Cardona. She’s my girl. My only. My angel. Her mother died giving birth. I didn’t have the heart to re-up. I raised her by myself.”

Mobster with a heart of gold. Right, Jack thought. But Cardona’s wife must have been a stunner because Angelica, blond, early twenties, with flawless skin and gray-green eyes, didn’t get her good looks from her father. Cardona’s gift was her self-assured attitude, which all but leaped off the photograph.

Jack Bertolino, master of the understatement, he thought.

“And doesn’t she know it. Too much so for her own good. You make mistakes, my line of business. Whatever.”

“What can I do for you, Vincent?” Jack said, dialing back the attitude.

Cardona tracked a seagull soaring overhead with his heavy-lidded eyes and rubbed the stubble on his jaw.

Jack would have paid good money to change places with the gull.

“I shoulda never moved out here. L.A. I’m a black-socks- on-the-beach kinda guy. East Coast all the way. Never fit in. But I’m a good earner and the powers that be decided they were happy with the arrangement. Everyone was happy except Angelica and me.

“She turned thirteen, didn’t wanna have nothing to do with her old man. Turned iceberg cold. I tried everything— private schools, horses, ballet, therapy, live-in help; nothin’ worked. She closed up tighter than a drum. I finally threatened to send her to the nuns.”

“How did that work out?”

“I’m fuckin’ sitting here, aren’t I? On this fuckin’ dinghy . . . no offense meant,” he said, trying to cover, but the flash of anger told the real story. “I hear you’re an independent contractor now.”

It was Tommy Aronsohn, his old friend and ex–district attorney, who had set him up with his PI’s license and first client, Lawrence Weller and NCI Corp. But Jack Bertolino and Associates, Private Investigation, still didn’t come trippingly off his tongue.

And thinking of the disaster up north, he said, “We’ll see how that goes.”

“This is the point. I haven’t seen my daughter in close to a month. Haven’t heard word one since around the time your son was laid up in Saint John’s,” he said. Reminder number two. “It’s killing me,” he continued. “I’m getting a fuckin’ ulcer. Then this.”

Cardona pulled out the L.A. Times with the front-page spread reporting on the woman who had died when her boat crashed on the rocks at Paradise Cove. As it turned out, a second woman down in Orange County had washed up on the beach a few weeks earlier at the Terranea resort, scaring the joy out of newlyweds taking photos at sunset. Talk about twisted memories, Jack thought. As if marriage wasn’t tough enough. He’d already read both articles with his morning coffee and hadn’t bought into the pattern the reporter inferred.

“I got a bad feeling is all. She’s never disappeared like this before—not for this long anyway,” he said, amending his statement. “And then . . .” Cardona said, waving the newspaper like it was on fire. “It says here they were both blonds. Both about Angelica’s age. They could be fuckin’ cousins. Could be nothing.”

“Did you file a missing-persons report?”

Cardona gave him a hard side eye. “Jack, don’t fuck with me. We take care of our own.”

Jack thought before he spoke. “I’m not one of yours.”

“What about your crew?”

Cardona flopped open his meaty hands. “I get angina, I don’t call my cousin Frankie, who has a certain skill set but stinks when it comes to open-heart surgery. Look, I get it. You were on the other team. But this is straight-up business. One man to another. One father to another. I need you to find my girl. You got my number. Use it, Jack. Money’s no object. Find my baby.”

Jack didn’t answer. He stared out at the navy-blue water of the marina, past row upon row of beautiful yachts, symbols of dreams fulfilled, and knew they were empty notions compared to family.

Cardona hadn’t actually spoken the words you owe me, but they filled the subtext of everything he’d said. He was not subtle. The big man had reached out when Jack was in need, and Jack had accepted the offer. Now Vincent Cardona wanted his pound of flesh.

“This is everything I know. Last address, phone numbers, phone bills, e-mail accounts, bank, credit cards, friends and whatnot. The whole shot,” Cardona said, holding the manila envelope out in Jack’s direction.

“I have other commitments,” Jack stated.

“You look real fuckin’ busy, Jack, if you don’t mind my sayin’.” His eyes crinkled into a sarcastic grin. Vincent Cardona does charm.

Jack accepted the overstuffed envelope with a sigh.

“If she don’t want to come back, fine. No funny business, no strong-arm bullshit from my end. You got my word. I just need to know that my blood is alive. I’m fuckin’ worried and I don’t do worry too good. Sleep on it, Jack. But do the right thing.”

Cardona’s eyes locked on to Jack’s. Jack remained silent. He’d take a look. No promises, not yet.

Vincent’s knees cracked and the canvas chair squeaked like it was in pain as he stood up. He covered a belch behind his fist and rubbed his gut as he moved stiffly past Jack. The boat rocked when Cardona stepped off and walked heavily away, his Italian leather shoes echoing on the wooden dock.

The weight of the world. Jack could relate.

Peter Maniacci opened the gate for his boss and then the door to the Lincoln Town Car, which plunged to curb level as the big man slid in. Peter ran around to the other side of the car and tossed Jack a wave like the queen mum. He jumped into the Lincoln, which lurched forward before Peter could slam the door shut.

Jack walked into the boat’s deckhouse, grabbed a bottle of water, and downed two more Excedrin. He stretched his back, which was going into a spasm from yesterday’s violence, and chased the pills with a Vicodin to stay one step ahead of the pain that he knew was headed his way.

Jack had already decided to take the case.

John Lansing started his career as an actor in New York City. He spent a year at the Royale Theatre playing the lead in the Broadway production of “Grease.” He then landed a co-starring role in George Lucas’ “More American Graffiti,” and guest-starred on numerous television shows. During his fifteen-year writing career, Lansing wrote and produced “Walker Texas Ranger,” co-wrote two CBS Movies of the Week, and he also co-executive produced the ABC series “Scoundrels.” John’s first book was “Good Cop, Bad Money,” a true crime tome with former NYPD Inspector Glen Morisano. “The Devil’s Necktie” was his first novel. “Blond Cargo” is the next book in the Jack Bertolino series. A native of Long Island, John now resides in Los Angeles.

Catch Up With the Author: